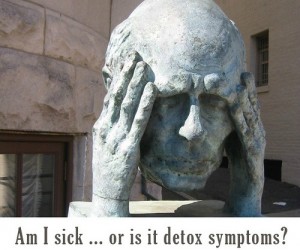 Everyone will experience this and everyone will experience it a little differently. I discovered for me that any dis-ease I had in the past was re-lived as the toxins came up and out of my body. Some of the issues I had in the past included severe skin problems, joint injuries, breathing and congestion issues, food allergies and digestive problems.

The most common for me was skin problems because I had severe cystic acne as a teenager that had left scarring on my face and upper body as well as old cysts on my upper back. As I started to de-tox, the acne reappeared for a while and then went away and the old cysts on my back re-awakened and disappeared over time. It seemed that my body was releasing the toxins primarily through my skin in the beginning.

I also noticed that the joint, cartilage and muscle injuries that I had incurred during my martial arts training came back up to the surface as well. My body would feel pain like I had just finished a hard training session and at the time it was a struggle to move my body … I FELT BEAT UP! Over time, this completely went away and now my body feels better than at any time in my life.

Other things I experienced were problems with being able to digest the new diet which would cause allergic reactions such as congestion and problems breathing (asthmatic symptoms). This also was something that had happened to me in the past as I had severe food allergies when I was eating poorly and living on fast food and mostly processed food. Again, this went away as my body became cleaner and I now have none of the old digestive issues.

Some of the symptoms of detoxing would happen daily and quickly such as feeling light headed, flu like symptoms and just moments of feeling ill. This type of thing happened at the very beginning and one moment i would feel fine and the next I would feel not so good!

Over time, my skin became clearer and smoother and most of the scarring from the old acne went away. My joint, cartilage and muscle injuries also healed and my body feels better physically than it has since I was a child. 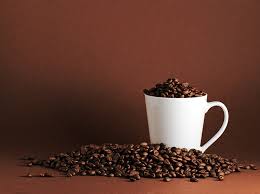 I was also noticing that my body became more sensitive to what I put into it and would react to things that it didn’t like more powerfully. One of my last food addictions was to cheese which was probably my favorite food. When I shifted to a raw diet, I made the move to the various types of raw cheeses and added them to my evening salad which satisfied me for a while.

But as my body became cleaner I noticed that it was not liking the heavy feeling that I had after eating it so I decided to skip it for a few days and I never added it back into my diet. I immediately felt better after my evening salads and never really ever missed it!

Another of my last food addictions was coffee (caffeine). I had been drinking coffee since the age of 4 years old on my grandfathers lap and didn’t want to ever give it up. But I could now feel how much stress it was causing my adrenal glands when I would drink it and I could no longer have a large cup in the morning. My consumption reduced over time to being able to let it go completely and I replaced it by adding Raw Juicing as my morning meal.