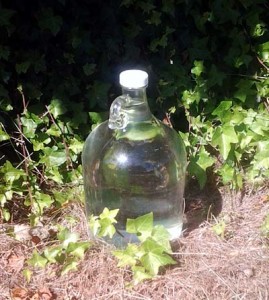 I have to admit that the day I started I did not know what it would be like to drink a whole gallon of water in one day. I was drinking one liter a day before I started and that seemed like plenty and …… there are 4 liters in a gallon …. yikes! Needless to say, the first few days were challenging for me for a few reasons. I started with distilled water from the local market that came in plastic bottles and I bought 7 of them on day one to last me a week.

I remember it had a slight plastic taste but that is common with the properties of distilled water acting as a magnet that removes toxins from anything it encounters. I was a bit concerned with the plastic going into my body but later discovered that once distilled water locked onto a toxin it stayed in the water and did not remain in my system. I remedied this a month or so after I started by buying a counter top distiller and using glass bottles instead of plastic.

On day one, I new I would have to start as soon as I got up in the morning if I was even going to have a chance at this so upon awakening I did just that. As I went through the day I discovered that I was so full of water that my appetite was much less than usual so even though I wanted to eat my normal regime of food I wasn’t able to do so.

My normal diet at that time I thought was fairly healthy. It consisted of a banana, yogurt, some granola and a big cup of coffee for breakfast. After a couple of hours I would eat a protein bar and then at lunch I would have a chicken or turkey sandwich and an apple. Then a couple of hours later I would have some trail mix and then for dinner I would have something like burritos with chicken, cheese, beans rice, peppers, tomatoes and cilantro. I wouldn’t eat after dinner because I had trouble sleeping if I went to bed on a full stomach.

Well with drinking all the water the first day I was only able to eat the normal breakfast, skipped the protein bar snack, and at lunch I was only able to eat half the sandwich with no apple. I also had to skip the mid-afternoon snack and had a much smaller portion for dinner that day ….. BUT I MADE MY GOAL OF DRINKING A GALLON OF DISTILLED WATER. I remember my body feeling full and out of sorts that day and of course i spent much more time in the bathroom urinating … lol!

Needless to say, after a couple of days of doing this and feeling full and out of sorts something would have to give if I was going to continue drinking the water. What gave was a big change in my diet ….

Serving Your Body
Scroll to top