Tony Mendoza Jr. was born and raised in northern California. He had two major interests growing up which were, sports/fitness and electronics. He worked in the Silicon Valley in the electronics field starting in 1980. At the same time he became interested in bodybuilding and fitness, eventually becoming certified as a fitness trainer in 1984.

He moved to Nevada City in 1993 at the age of 33. There, while working as a Certified Fitness Trainer in a local fitness club, he met Robert Phillips, who encouraged him to try Kung Fu San Soo. He immediately fell in love with the Art and trained regularly, getting his black belt in 1998.

In 1996 he moved to the Club Sierra Health & Fitness Center,  working as a Certified Fitness Trainer and Certified Kung Fu Instructor until July of 2011.

During this time Tony specialized in working with the physically and developmentally disabled, seniors as well as martial artists. He found a direct correlation between martial arts training techniques and the needs of seniors and disabled because a lot of the exercises focused on strength, balance and hand/eye coordination which were a common issue with all three groups. 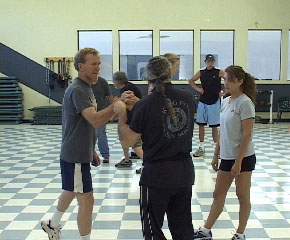 From January 2002 until November of 2010  he also work at Club Sierra as an independent contractor and Fitness Coordinator for the Chapa De Indian Health Program. This program was funded through Chapa De by a grant from the American Diabetes Foundation and allowed Tony to work with a group of up to 70 Native Americans to improve the quality of their lives through fitness and diet counseling to minimize the diabetic condition. The program ended unfortunately in November of 2010 when funding for the grant expired.

In July of 2011 Tony moved to Humboldt County Ca. and began a self-transformation to the next level of fitness and wellness. By altering his diet to all raw organic uncooked foods and incorporating information he had learned about the health benefits of drinking distilled water and energy healing techniques, he lost over 40 pounds of body fat and healed the chronic joint injuries he had accumulated during his martial arts and bodybuilding training during the past 20 years.

He is a walking testimonial on the benefits that all these years of experience have to offer and can help you facilitate your own healing whether it is from injury or illness.

In January of 2015, Tony returned to Nevada County and to the Club Sierra Health & Fitness Center. Currently, Tony is working as a Certified Fitness Trainer and Certified Kung Fu Instructor at Limitless Fitness. 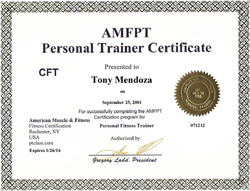